This emblematic design is part way towards a traditional Buddhist mandala, here illustrating the wall of vajras and the wall of lotuses that describe the inner boundaries of a sacred space, for example a place for meditation practice. Anything that passes through the three walls is progressively purified on it’s journey inwards. (The final wall, of fire, is still in development.)

Full disclosure: only parts of the design were actually painted, in gouache, at the biggest manageable size. The detail work required in the floral ornaments meant that I couldn’t easily make a canvas big enough to paint the whole. So for a first attempt at such a project, I broke the design into elements, took them all to be professionally scanned, then assembled the whole in Photoshop. If printed at actual size, it would fit on an A0 (849 x 1189mm) sheet. I imagined that it would form the base for a shrine upon which a sculpture of a Buddhist deity would sit.

I took a great deal of inspiration from the tradition of Turkish manuscript illumination called tezhip, but there’s also a dash of contemporary street art sensibility. 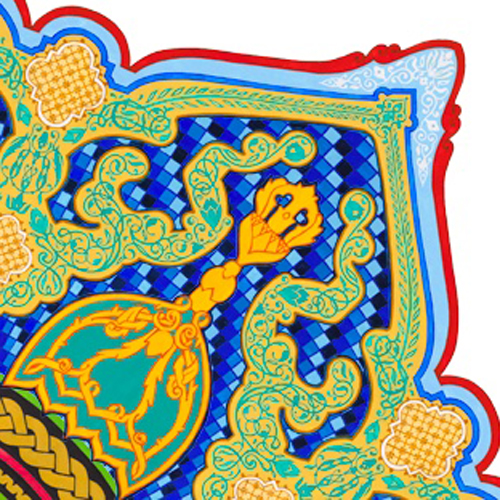 This project demonstrates the application of Adobe Photoshop and Gouache. Follow the links to see more projects using these skills.