Coloured pencil on cartridge paper, A3

This is one of those projects that started life as a doodle, and then became a practically obsessive concern.

There was no purpose or objective, other than that I appreciate both celtic knotwork and arabic script. I wanted to do something moving from that inspiration pair, whilst at the same time not trying to directly and literally represent either tradition. It quite naturally acquired a street art twist, and I have wondered what it would look like sprayed on a wall, although I confess that’s an insanity too far!

If drawing this was hard, then translating that into vectors in Illustrator was somewhat bonkers. It was only achieved through sheer bloody- mindedness. Vectors are completely unforgiving of any sort of misshapen curve: every flattening off visually screams its clumsy existence.

The letters themselves, STDN, were picked just because that’s one of the ways I abbreviate my otherwise fairly long name. 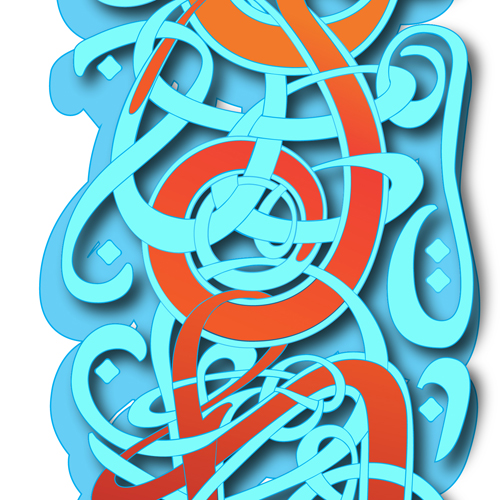 Notice the (almost!) endless weave of line that's a signature of celtic knotwork, alongside some free-standing decorative strokes lifted from Arabic script, both given a street art twist.

This project demonstrates the application of Adobe Illustrator Drawing, and Lettering. Follow the links to see more projects using these skills.