Character Design: Study of a Mud-Splattered Dog of War

This character design started graphic life as Boromir from The Lord of the Rings. I’d agreed to paint each member of The Company of The Ring for a friend and he turned out to be the most successful. But I didn’t feel I was quite finished with him after he was sent on his way. He took on a bit of a life of his own, although I’ve never really decided what his story is. I did conclude that he was a nasty piece of work: intensely self-interested, probably as smelly as he is grubby, and even more greedy.

Inspired by Boromir from “The Lord of the Rings”, a study of textures: a range of soft leathers, steel plate, wood, and wool.

Character design: if you have an enthusiasm … just run with it!

As with other paintings from this time frame (the mid-Nineties), there were two forces in play. The first was quite simply the process of finally teaching myself to paint. I’d managed to make my whole way through formal art and design training without getting any better at painting. This was in no-small way a result of the outrageous snobbery of (most of) my teachers. I was enthusiastic about fantasy character design and that was a practically unspeakable interest.

The interest appears to have been as persistent as the discouragement. My work staggered along, variously unsuccessfully. However, just a few weeks after I finally graduated in 1992, I had a little epiphany. A quick, small, humorous illustration about a friend resulted in an unexpectedly successful piece. The best elements were the textures. Realising I was on to something (at last), and free of the dubious influence of teachers, I realised I was free to explore whatever themes I wanted. The second push behind this particular project was about opening up to my own influences.

I have a slightly quirky urge towards historical accuracy. The quirk is that I don’t mind mixing up the historical periods! For the most part, this character is dressed in gear from the period of the English Civil War. The Great Coat and mud is, however, inspired by the trenches of the First World War. At about the time he was created, I had begun collecting picture reference books. My favourites were the studies of military re-enactment groups. Many of the elements of this figure are lifted from The English Civil War Recreated in Colour Photographs (Chris Honeywell and Gill Spear, Windrow & Greene (1993)). His face, apropos of nothing I can recall, is based on a photo of Duran Duran vocalist Simon Le Bon, found in a magazine clipping.  The nod towards chiaroscuro is from Caravaggio. 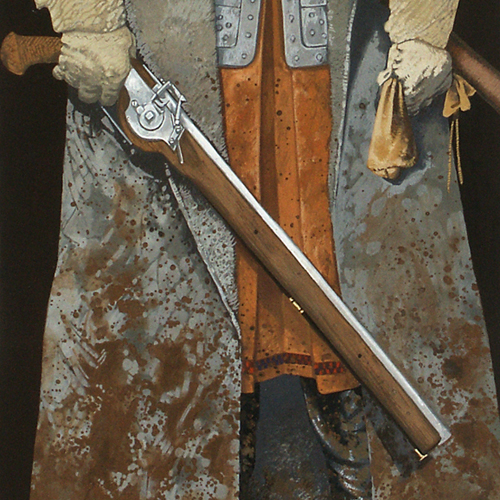 This project demonstrates the application of Gouache Drawing, Character design, and Figure work. Follow the links to see more projects using these skills.